Life Beyond will give you the opportunity to become a citizen of a new kind of sociotech society. In the game, you’ll have the freedom to shape your own experience! 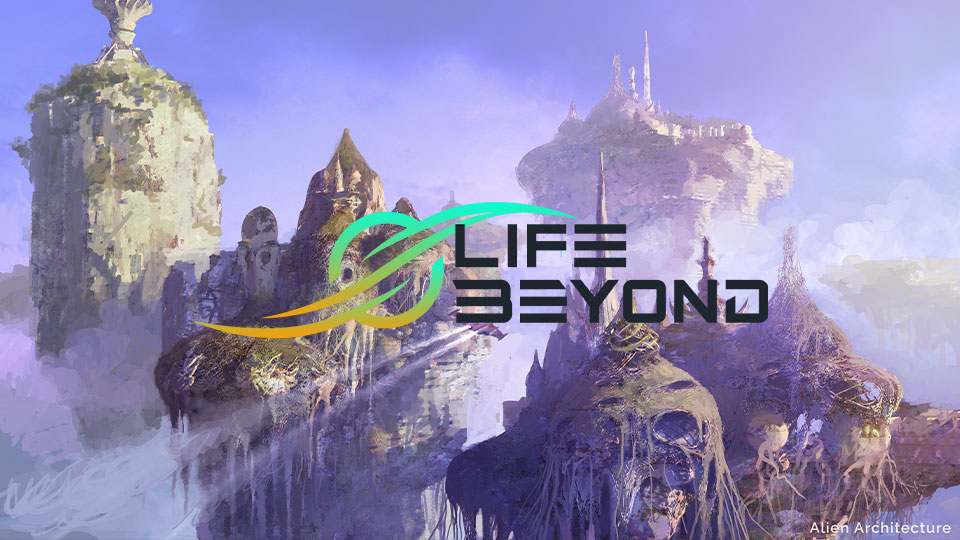 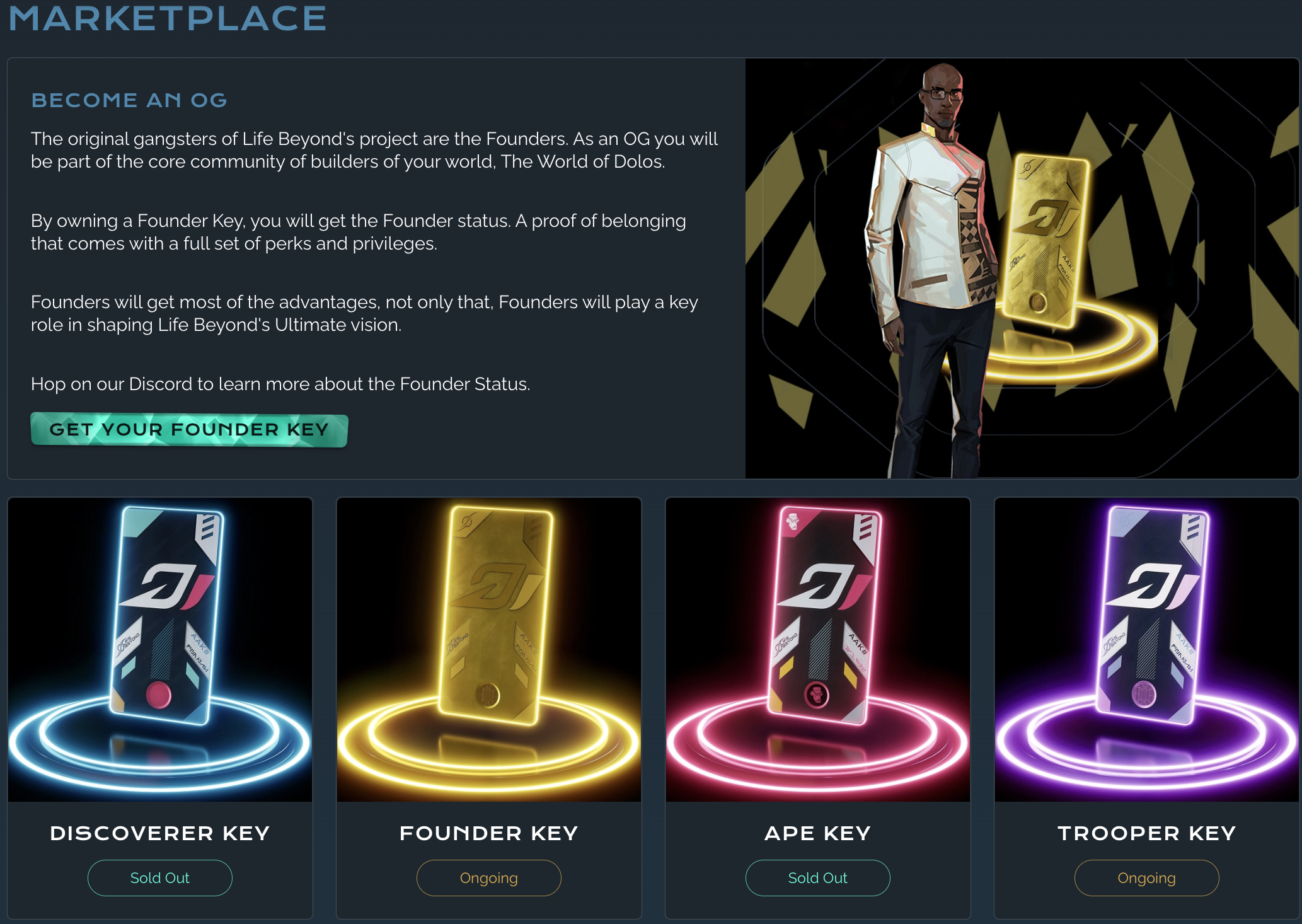 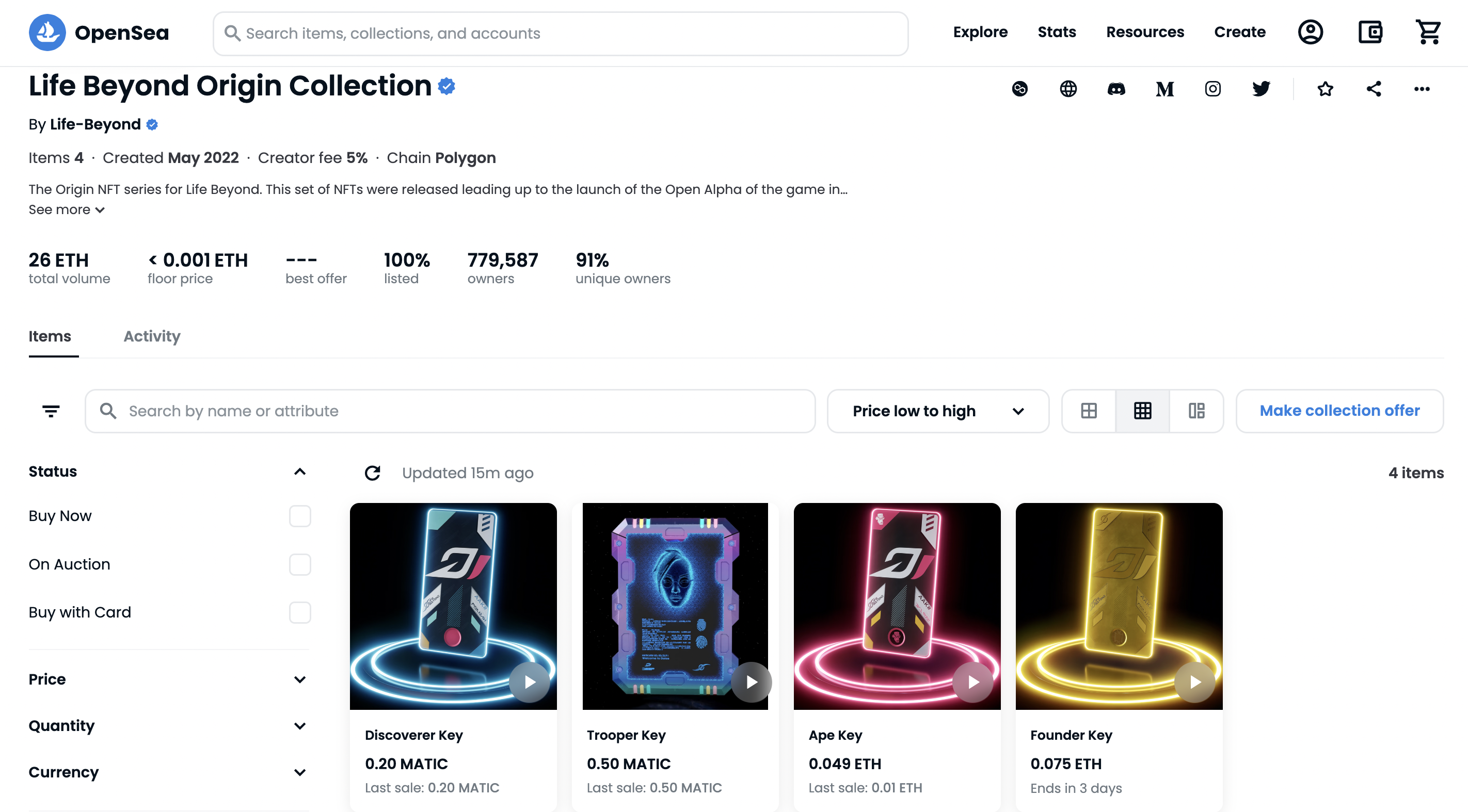 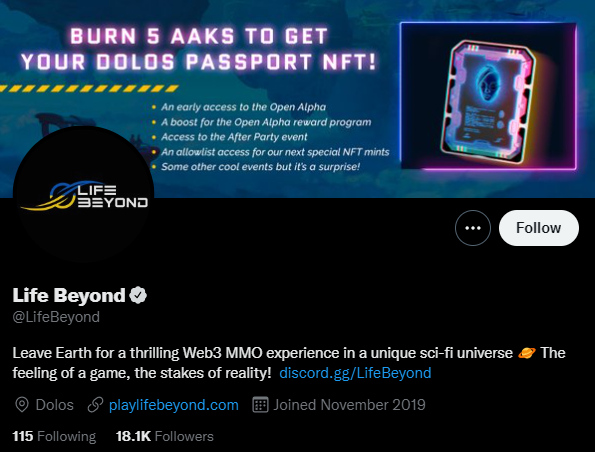 Life Beyond will give you the opportunity to become a citizen of a new kind of sociotech society. In the game, you’ll have the freedom to shape your own experience!

As a true citizen of this society, you will have the chance to own land and build a home, heck, build a bakery, a cinema, a hospital, build whatever you feel fits the needs of the community!

You’ll get to develop special skills and learn how to craft unique NFTs and items to trade with other players.
Outside of the game, you will be able to interact with your community and fulfil a bunch of goals that will be rewarded in the universe of Life Beyond!

All of our players will have true ownership over their path: create, sell, trade, build, or just enjoy the fun gameplay of our coop missions to fight the corruption and save the planet Dolos.

Would you be a major, a bartender, a warrior, an explorer? We are waiting for you!

Life Beyond is the first of a new generation of Massive Multiplayer Online games, in which wealth in the game transforms into wealth in real life, through Fungible and
Non-Fungible Tokens. Players discover, fight and collaborate to rid Dolos of its alien threat. It features qualitative combat mechanics based on a Trinity system.

Once Dolos is liberated, other gameplay mechanics are employed which enable new interaction between players. Crafting, building, supplying and more will be key as the players organize themselves and establish economic systems. These can include rules or laws, all created and shaped by the players themselves.

Players will collaborate in a large variety of Expeditions in order to obtain valuable resources and ancient artifacts. This is a key element of the game, and drives the expansion of the Dolos universe by opening up each Region. The nano-bot alien threat is prevalent and exploration is dangerous. Intense battles rage. The players will need all their skill, tactics and ruthlessness.

There are also riddles to unlock and puzzles to solve though. Strategy will be required, as will leadership and co-operation. Every region has a different narrative arc, and all finish with an intense  limax involving all the players. In essence, they’re like full, exciting games within the main game itsel

Progressing through Life Beyond isn’t linked to the player’s avatar. Players can change roles freely. Their property, equipment and weapons largely remain theirs, but certain events can cause players to lose items or require them to carry out repairs on them.

Items such as weapons and equipment are either crafted or purchased. Blueprints indicate what can be made, and ‘ingredients’ or elements are needed to craft them.

In addition, the game rewards experimenting, whereby players can build what they want with the resources they have. This is possible because every element has a set of criteria which will work (or not) with others to become a new item with its own properties.

Life Beyond at the moment of writing has 4 different NFTs available for purchase, you can either buy them on their internal marketplace through minting or on secondary market like Opensea.

You don’t need to be on any whitelist in order to mint the actual NFTs, you just need to connect your wallet and pay the fee and the NFT will appear in your wallet. You will be inlcuded on a whitelist for some of the future mints by holding Trooper Key NFT and if you hold the Founder NFT you will receive some free NFTs in form of airdrop, as well as whitelist spot for all of the future mints

Life Beyond will exist on multiple blockchains and thanks to their partnerships you can mint on their website using a lot of different tokens like:

Right now there aren’t too many ways to earn since the game is in alpha version still, but the team already explained their vision on how the P2E will work. You will be able to earn fungible and non-fungible items as well as $LBToken.

Expeditions are a very profitable missions where the players earn high rewards by completing certain missions. You’ll be able to earn some secret artifacts and special items, expeditions however are really difficult and will require a lot of skills from all the players that’ll need to fully cooperate. There will be several puzzles that you’ll need to solve in order to advance in your quests adding even more difficulty and requiring a strategical approach.

Surprisingly looting won’t exist in the game and all the items like weapons and armors will be only available by crafting or buying them from the marketplace. Crafted items will have the possibility to become NFTs that can be sold later on.

Land NFTs will be introduced in the near future and will become one of the main economy items. Once the players will conquer a region, every land on its territory will be available for purchase, there will be 4 different sizes and the more buildings you have and the higher number of activities occur on a certain land, the higher rewards you’ll earn.

This is only a beta version of our research and findings. Full BIGDAVE database for the People launching soon.